Matt McAndrew of the Bach to Rock franchise in Wayne, Pennsylvania, took the stage during show’s 7th season

Bach to Rock, America’s music school franchise for students of all ages, announced today that Matt McAndrew, a musical instructor at one of its franchise-owned schools in Wayne, Pennsylvania, took the stage last night on NBC’s Emmy Award-winning musical competition series, The Voice. McAndrew, of Philadelphia, performed during the blind auditions and chose to join Adam Levine’s team.

“Matt is exactly the kind of instructor we love to have at our schools across the country. His passion for music and talent on and off the stage is reflected in teaching, which keeps students engaged and excited to learn,” said Brian Gross, president of the Bach to Rock music school franchise. “We wish Matt the best of luck as he continues in the competition and know he will only grow as part of Team Adam.”

“It has been great having Matt as part of the Wayne Bach to Rock team. Everyone here is rooting for him as he enters the first round of auditions on The Voice,” said Ellen Good, who owns the Bach to Rock music school franchise in Wayne with her husband, Dave Leonard. “Since joining Bach to Rock in 2013, Matt has truly inspired a number of students to take their music to another level. Matt also has developed a student band at Wayne Bach to Rock, which is performing locally and learning the skills needed to be a real music team. We are excited to see where his talent will take him.” 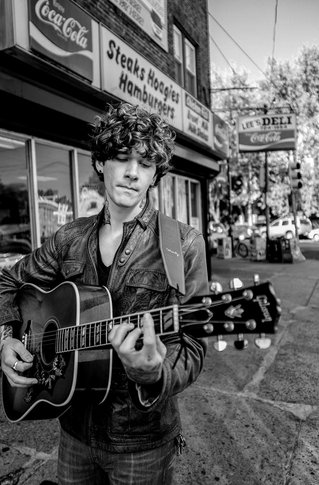 Matt McAndrew, a contender on NBC’s The Voice, is also a sought-out teacher at the Bach to Rock franchise in Wayne, Pennsylvania.

The Voice returns with the strongest vocalists from across the country invited to compete in the blockbuster vocal competition show’s seventh season. Internationally acclaimed artists Gwen Stefani and Pharrell Williams join returning mega-stars Adam Levine and Blake Shelton as celebrity musician coaches, while Carson Daly continues to serve as host.

The show’s innovative format features five stages of competition: the first begins with the Blind Auditions, then the Battle Rounds, the Knockouts, the Live Playoffs and finally, the Live Performance Shows.

As a singer, songwriter and recording artist, McAndrew has approximately 40 songs to his credit and an album available for download on iTunes. He has a bachelor of arts degree in vocal performance from The University of the Arts in Philadelphia.

“I am excited and honored by the opportunity The Voice has given me to share the music I love with a bigger audience,” said McAndrew. “I’m thankful for the time I’ve spent at Bach to Rock with incredibly talented students, who inspired me day in and day out to turn my musical aspirations into a reality.”

In 2014, Washington Family Magazine named Bach to Rock to its “Best for Families” list and readers of Northern Virginia Magazine voted the company as one of the “Best of NoVa.” In 2013, Inc. magazine named Bach to Rock one of the fastest-growing private companies in America for the third consecutive year and Franchise Times ranked Bach to Rock on its Next 300 Franchise System list. Additionally, Back to Rock was named the No. 1 company to watch by the Washington Business Journal and one of Franchise Times’ 500 Powerhouse Brands.

The Bach to Rock music school franchise is one of the nation’s fastest-growing private companies — named to Inc. magazine’s annual Inc. 500|5000 list for three consecutive years. We have corporate-owned schools — two in Maryland and four in Virginia — the first of which opened in 2007. The first Bach to Rock franchised school opened in 2013, and there are now seven franchise schools in New York, Pennsylvania and California. Several more franchise schools are in the pipeline, and the company expects to triple in size by 2015.