The Bach to Rock music education franchise near Washington D.C. was rocking the radio waves when one of its bands, Out of Line, performed live on WTOP as a teaser to the school’s Bachapalooza event.

Out of Line has been together for five to six years, according to Matt Cummings, the music director at the McLean, Virginia, location where the teenagers are enrolled. They were one of the 70 bands performing at the Bachapalooza event throughout late January to early February. While at the famed Glass Enclosed Nerve Center of WTOP, they performed live their original song, “Breathe Easy.”

Matt told the Washington news station that students at the Bach to Rock music education franchise learn musical styles from many decades. He teaches the students new songs to keep them fresh.

“They’re such good musicians and so appreciative of so many different styles that I can play pretty much anything for them that is very musical, and they have respect for it and desire to play it, as well,” says Matt. 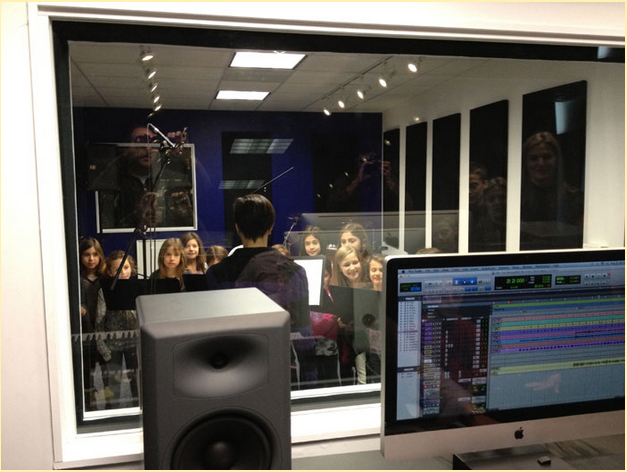 Students at the Bach to Rock music education franchise learn to record in a studio.

This isn’t the first time that the Bach to Rock music education franchise has had broad exposure over the air waves. We got a big break when one of our teachers in Wayne, Pennsylvania, Matt McAndrew, finished second on “The Voice” in 2014.

Bach to Rock is a school for students of all ages. It uniquely turns music into a team sport by creating student bands that learn to play sets, record in a studio and perform in public. It provides engaging individual music lessons for individuals that exposes students to whatever kind of music they like — Top 40, classical, hip-hop, blues, country, gospel, jazz, a cappella, bluegrass, electronica and more.

Schools are cutting music programs nationwide, making music education harder to come by, Bach to Rock is stepping in to fill that void, and we’re gaining exposure locally and nationally. There are many large markets throughout the U.S. without a Bach to Rock franchise, and there’s no lack of parents seeking quality music education for their children. Adults also enroll in Bach to Rock classes, and our diverse slate of musical offerings creates multiple streams of income for the Bach to Rock owner.

Our franchises are typically run by leaders with strong backgrounds in management or business, who may also have a passion for music or childhood education. The investor-owner need not be a musician, but he or she does need the ability to build a team of energetic, dependable and committed musicians.

For in-depth details about a Bach to Rock music education franchise opportunity, download our free franchise report. You can also learn more by visiting our research pages.