How the Bach to Rock Music Franchise Creates Raving Fans

While many franchise brands rely on paid media to get the word out about their services and products, the Bach to Rock music franchise has great success with grassroots marketing, which has minimal costs and maximum effects. When one of our schools opens, it gets strong local “buzz.” And it’s no wonder, because Bach to Rock students and staff are out in the community performing enthusiastically at farmers markets, festivals, church fundraisers, restaurants and schools.

“Bach to Rock is the only brand I know of with this particular kind of marketing opportunity,” says Angela Sakell, Vice President of Marketing at Bach to Rock. “It is really very unusual for a brand to be so naturally embedded in a community.”

Bach to Rock’s grassroots approach to music education has another dramatic side effect. It contributes to the creation of the “raving fan,” a customer who not only comes back but who goes out of their way to promote the franchise to others.

We have an ever-growing legion of raving fans at the Bach to Rock music franchise. Every month dozens weigh in with testimonials and reviews on the Internet. Below is just a small sampling of top-rated reviews from the summer of 2014. 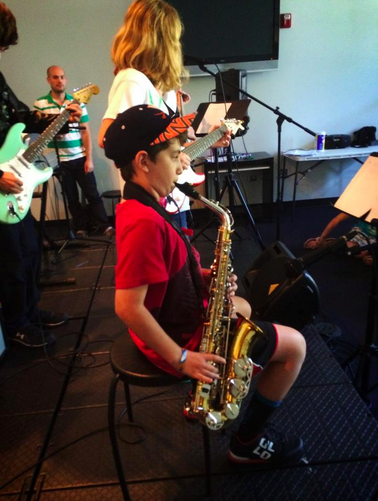 The Bach to Rock music franchise lends itself to word-of-mouth advertising. Typically, customers rave about Bach to Rock in their communities, sharing the news with friends and colleagues.

“We love that you make bands for the kids to be in and have a band coach to guide them. Also love that you set up various gigs for the bands. Great experience for my daughter!”
Sept. 2, 2014 — Rated 10 out of 10 by Tammy Foley

“The instructors are so good at working with kids. We had tried a different music store before finding B2R – the instructor was not very personable and didn’t make music fun. All the B2R instructors have gotten our kids excited about music and learning to play.”
Sept. 2, 2014 — Rated 10 out of 10 by Jennie Rosecan

“My son was nervous about starting his voice lessons. After 30 seconds, his B2R instructor made him feel totally comfortable. My son left his first lesson asking, ‘Can I extend my time?’ What more could a parent want?”
Sept. 2, 2014 — Rated 9 out of 10 by Matthew Gould

“The teachers that my kids and I have worked with have been fabulous. It’s also great to have the option of joining a band, which I feel increases the fun and skill levels at the same time.”
Sept. 9, 2014 — Rated 10 out of 10 by Leslie L. Bartnik

“Bach to Rock is an amazing school. My son went to another school for awhile, and we were not at all satisfied. My son was considering giving up the drums, but he loves Bach to Rock so much that he takes private lessons once a week, has joined one of the bands and attended the summer camp. I also love the staff. They are incredibly professional, personable and accessible. I have recommended Bach to Rock already and wouldn’t hesitate in a heartbeat. I even have one of their stickers on my car!”
Aug. 26, 2014 — Rated 10 out of 10 by Andrew Beardall

“After 5 years of coming to B2R my son has improved so much as a musician, and he’s been presented with amazing opportunities, from performing in scenarios like 9:30 Club, The Fillmore, The Hard Rock Cafe, The Electric Maid and so many others — as well as obtaining a partial scholarship to attend the five-week summer program at Berklee College of Music. He believes that the private instruction he receives at B2R is getting him ready for a music career.”
Aug. 26, 2014 — Rated 10 out of 10 by Ana Aleman

“We appreciate the very flexible scheduling and the young instructors who are enthusiastic about music and make the classes fun. My son especially likes being able to jump right in and learn to play his favorite rock songs. He never enjoyed playing an instrument until now.”
Aug. 25, 2014 — Rated 10 out of 10 by Robyn Desroches

“We had never been to Bach to Rock but booked our daughter’s tenth birthday party there based on a recommendation from a friend. We could not have been happier with how it went. The staff members were fantastic — so great with the kids. They all had a blast, and Hannah declared it the best birthday party she’d ever had! We’ve signed Hannah and her little brother up for camp in a few weeks, and now they’re both interested in taking music lessons. Thanks for a great party!”
Aug. 7, 2014 — Rated 10 out of 10 by Heather Parker

“B2R teachers help young students feel very comfortable in the classroom. They know how to capture young children’s focus in the classroom. Friendly and dedicated staff try their best to accommodate student needs. Very enthusiastic and fun place for all ages. Two of my kids taking piano lessons from past one year, they just love it.”
Aug. 5, 2014 — Rated 10 out of 10 by Siva Vijay

The Bach to Rock music franchise is one of the nation’s fastest-growing private companies — named to Inc. magazine’s annual Inc. 500|5000 list for three consecutive years. We have corporate-owned schools — two in Maryland and four in Virginia — the first of which opened in 2007. The first Bach to Rock franchised school opened in 2013, and there are now seven franchise schools in New York, Pennsylvania and California. Several more franchise schools are in the pipeline, and the company expects to triple in size by 2015.

To find out why we are the nation’s leading music education franchise, visit our research pages. If you would like to read a Bach to Rock franchise review, please visit our blog. To learn even more, fill out a form to download our free franchise report, and someone will call you to start a conversation. We look forward to speaking with you!