The recent debut of the Bach to Rock music school franchise in Folsom, California was a big hit in the Sacramento area — and for good reason.

The opening of the school marks the brand’s first introduction the on the West Coast, and it’s only the beginning. More schools are planned west of the Mississippi, including 10 franchise locations in Denver, Boulder and Colorado Springs, Colorado.

The June 7 opening of Bach to Rock Folsom even landed a feature spot on Fox40, a popular local station.

“We’re thrilled to open the first Bach to Rock on the West Coast and introduce our innovative music instruction to the Folsom community,” says Melissa Bartell, Site Director of Bach to Rock Folsom. “We think students will love the variety of programs we offer and will enjoy receiving personalized instruction based on their skill level, so we can make learning music fun. We look forward to sharing the gift of music with families for many years to come.” 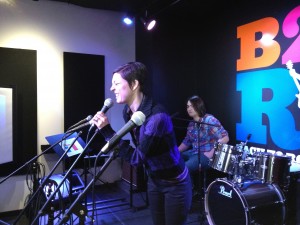 Bach to Rock is transforming music education on a national scale at a time when music instruction in schools is dwindling despite the soaring demand for music education. We’re taking the lead in music education with a unique approach that allows students of all ages to explore the kinds of music they love — and then play that music in bands and ensembles that perform in their communities.

“Folsom and Sacramento County are like many communities across the United States — the demand for high-quality music education is at an all-time high, and yet federal and state budget cuts are continuing to eliminate music and arts programs,” says Brian Gross, President of Bach to Rock. “Studies have shown that learning to play music in a group helps students learn teamwork, develop social skills and build self esteem, among other benefits. Every student should have the opportunity to be exposed to music education, so we are excited to introduce our fun, progressive curriculum to families in Folsom.”

A clear national leader in the music school franchise industry, Bach to Rock expects to triple in size by the end of 2015 and envisions opening 500 schools in the next decade.

Bach to Rock experienced a 61% growth rate from 2009 to 2013 and was recently named to “Inc.” magazine’s annual 500|5000 list for the third year in a row. Franchise Times ranked Bach to Rock on its Next 300 Franchise Systems list, and it was named the No. 1 company to watch by the Washington Business Journal. Most recently Bach to Rock was named to Franchise Gator’s 2014 Top Emerging Franchises list.

Bach to Rock is a music school franchise for students of all ages — from early childhood through high school and beyond. At Bach to Rock, we know that learning music should be fun and that students learn best when they play music they enjoy. We are one of the nation’s fastest-growing private companies — named to “Inc.” magazine’s annual Inc. 500|5000 list for three consecutive years. To find out why, visit our research pages. If you would like to read a Bach to Rock franchise review, please visit our blog. To learn even more, fill out a form  to download our free franchise report, and someone will call you to start a conversation. We look forward to speaking with you!