Bach to Rock’s approach to music is a huge hit with children and families, yet adult students are also finding success in Bach to Rock schools. Jorge R (portrayed in this video) is an adult student at our school in Bethesda, Maryland. Jorge was named the Bach to Rock Student of the Month in October 2014.

A closer comparison between Bach to Rock and School of Rock

While Bach to Rock and School of Rock are both franchised music education schools that provide music lessons, camps and bands for students, there are differences between the franchises, especially when it comes to curriculum and incentives.  Here are a few comparisons.

Types of music: The Bach to Rock franchise offers exposure to all forms of music — Top 40, classical, hip-hop, blues, country, gospel, jazz, a cappella, bluegrass, electronica, choral music and more. The focus is on what kind of music the student loves and responds to. 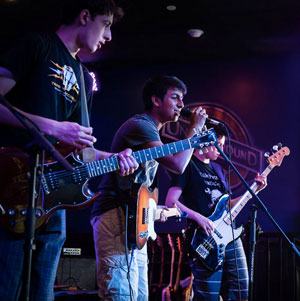 Bach to Rock is reinventing music on a national scale. CIG, our parent company, has already invested more than $20 million into the Bach to Rock franchise concept to perfect the business model and create a scalable business that translates into a reputable nationwide franchise system.

Incentives for veterans: Bach to Rock offers military veterans 50% off the franchise fee and waives the royalty fee for six months.

School of Rock offers a 10% discount off the initial franchise fee for qualified veterans. [Source: IFA]

School of Rock is designed as an after-school program for young people. Revenue comes from individual and group lessons and branded merchandise. [Source: School of Rock website]

At Bach to Rock we know that when students learn to play the music they love alongside their peers, they’re learning more than notes and melodies. They’re picking up key life and career skills — and a love of music — that will last a lifetime.