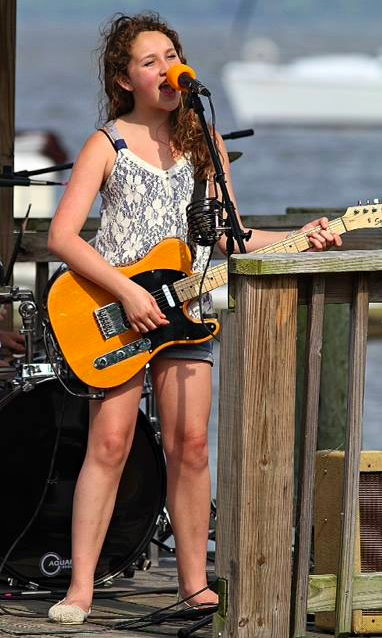 Calista Garcia is an eighth-grader whose ruminations on the world are very advanced for girls her age. Calista, a Bach to Rock franchise student in McLean, Virginia, was recently featured in The Washington Post for scoring “Lizzy Strata,” a teen-centric take on the ancient Greek play “Lysistrata.”

Calista, who attends the H-B Woodlawn Secondary School in Arlington, Virginia, is a great example of what the Bach to Rock franchise brand represents. She is learning music on her own terms and having a lot of fun in the process. Besides her achievement of writing the music for “Lizzy Strata,” she is a member of Diamond Dolls, and all-girl band of Bach to Rock students. She plays a multitude of instruments, including guitar, piano, bass, mandolin, harmonica and drums.

“Lizzy Strata” was written by students at the H-B Woodlawn Secondary School. Calista, who at the age of 13 already has her own YouTube channel, wrote the score for the musical by studying the play and writing lyrics based on the portions of the play that inspired her. The musical takes on issues such as school reform, oppression at the hands of adult authority and foreign policy from a teen perspective.

The Washington Post described Calista’s voice as “halting and haunting, with a depth of emotion that belies her age.”

“I’d just look at the script and figure out which songs needed to go where,” Calista said of her creative process in the interview. “First, I wrote the lyrics — I could do that in a free period without a guitar while I was thinking of a rhythm in my head. Then I’d go home and think of chords — ‘What haven’t I used yet? What riff sounds cool?’ ”

Bach to Rock empowers and inspires students such as Calista to explore the music they love. Alongside that process, our franchise owners are able to pursue careers that do more than generate return on investment — they also make a difference in students’ lives and make a substantial contribution to the cultural fabric of their respective communities.

In this video on her YouTube channel, Calista Garcia performs an original song, “Fade to Black.” Calista, a Bach to Rock student in McLean, Virginia, was recently featured in The Washington Post for scoring a teen-centered musical based on the Aristophanes’ play “Lysistrata.”

Bach to Rock franchisees find and hire gifted music teachers in their communities, most of whom are already professional musicians. Calista’s Bach to Rock franchise teacher, Mark Schenker, is a former band member of the 1980s group Kix. He helped her record and mix a CD of the songs from the musical. They laid the tracks down in the recording studio at the Bach to Rock school in McLean.

“We’re so proud of Calista’s achievements and of Mark for his skilled musical mentoring,”

says Bach to Rock president Brian Gross. “They showcase the things we witness within the walls of Bach to Rock schools every day —  creativity, inquisitiveness and a passion for learning music of all styles.”

Calista won’t be pocketing the proceeds from her CD sales. Instead, those funds are going toward Humanium, an organization that supports sustainable development and fair trade, while giving the priority to a global approach centered on self-help, participation and autonomy of the poor.