How Grassroots Marketing Sets the Bach to Rock Franchise Apart 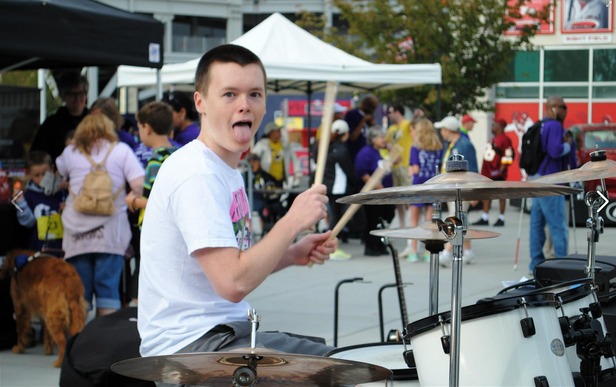 Students at the Bach to Rock franchise routinely play at public gigs in their own neighborhoods and communities. It’s great musical experience for them and an effective and inexpensive way to get the word out about the brand.

Angela Sakell, VP of Marketing at Bach to Rock, has spent the last few years immersing herself in the brand and working at the executive level to build a successful franchising model. The seasoned marketing pro is also a fan of the Bach to Rock franchise as a consumer. Her 10-year-old daughter Grace is a guitar student at Bach to Rock. Twelve-year-old Kate is learning how to DJ and plays in a Bach to Rock band that gigs at local restaurants.

“From a marketing perspective, Bach to Rock is unlike any brand I’ve ever worked with,” Angela says. “It is really very unusual for a brand to be so naturally embedded in a community.”

Angela’s expertise is making a big difference on the Bach to Rock franchise team. Here are a few of her insights on our recent growth and Bach to Rock’s unique approach to marketing.

What is your own musical background? I started playing clarinet in fourth grade and continued through high school. I was in marching band, and I sang in chorus and musicals. Then I stopped. It would have helped me to learn a mainstream instrument so I could play the music I liked. The songs we were playing in band weren’t the same songs I was listening to on the radio. It’s the kind of story we hear often from Bach to Rock customers.

What’s your background, and how did you end up at Bach to Rock? I’ve always worked in the marketing arena. I spent several years in the advertising agency side of the world. Then I went client side. I worked with various franchise brands — Sylvan Learning Center, Nutrisystem, Jiffy Lube. I’ve mainly worked in consumer marketing from the response/direct response angle.

Three things brought me to Bach to Rock. The first was my personal relationship with Brian Gross. We worked together previously at Sylvan Learning Center and we kept in touch. Brian called on me to help Bach to Rock with the franchise process when I branched out as a consultant.

Secondly, I knew Bach to Rock was a very successful brand that had done well during tough economic times. It was a known brand with a good reputation in the community I live in. I knew a lot of families who were taking their kids to Bach to Rock.

Finally, Bach to Rock appealed to me from a marketing perspective because it’s a positive brand with a good consumer reputation. It’s all about the positive side of learning music. You are surrounded by musicians and students having a great time. It’s a fun brand.

Bach to Rock seems poised to grow in big way. How have you ramped up for that growth? We have done lot of work in the last three years. It started around the time I began working with Bach to Rock as a consultant. We knew we needed to hit some markers in order to be franchisable. We knew the concept had to be scalable. It had to work in other markets; it had to make business sense; and there had to be consumer market for it. As we began to analyze it all, we were able to check off all the boxes.

We thought it was a telltale sign that our six schools in Washington, DC suburban market were so successful. Plus, the demand is there; especially given the fact schools are cutting their arts budgets. Bach to Rock is a proven concept with solid economics behind it.

What are some of your achievements as you’ve been considering all these factors? The emphasis for the past two to three years has been: What do we need to put in place for us to be a good franchisor? What do we need to do to make sure Bach to Rock is scalable? How do we make sure we can give franchisees what they need? We’ve spent the past two years on development so that someone can easily come in from the outside and make a school work using our IT platform.

We developed a platform where franchisees can go grab what they need — the operations manual, training, marketing instruction and support. Now we have two- to three-day training, webinars, PowerPoints — a whole lot of infrastructure that didn’t exist prior to two years ago.

The operations manual was a big infrastructure item to tackle. We created a 500-page manual by collecting information and best practices from our various schools and codifying all the material. We also tackled the curriculum. We had to write it and codify it so that
franchisees and teachers who haven’t experienced us can pick up our method and teach it to represent the way we want the Bach to Rock brand to be — fun, flexible and geared towards the child.

When did you start to sell locations outside Washington, D.C., area? The first franchise opened in Port Washington, New York, in January 2013. The second was in Philadelphia in July 2013, and a third just opened in Sacramento in June. One of our big success stories is with multi-unit investors in New York who have an initial six-unit deal. They have opened one very successful school in Port Washington, and they were scheduled to open another school in 18 months. Now they are scheduled to open two new schools within 18 months. We have a school in Denver coming online in September 2014 — another multi-unit deal. By the end of 2014, we will have gone from six corporate schools in 2012 to six corporate schools and six franchises, effectively doubling our size.

Bach to Rock’s marketing really is a very different kind of marketing. Choice Hotels can’t go out in the community and show you one of their rooms. Sylvan Learning doesn’t go to a festival and give math tests. Bach to Rock is the only brand I know of with this particular kind of marketing opportunity. It is really very unusual for a brand to be so naturally embedded in a community.

Most other brands rely on paid media to get the word out. They usually spend 10% to 20% of revenue on marketing efforts. We are able to market our schools for around 7% because so much of the marketing is a grassroots effort. It takes time for people to coordinate these events in the local community, but it involves virtually no money. Instead, we are going to places like fairs, festivals, church fundraisers, restaurants and local schools. We are out in the community showing them what we do. We have demonstrations of what the infants, toddlers and preschoolers are doing in our schools, and our Back to Rock bands play in public at these community events. Typically, we have a little booth or tent at an event. It’s a great way to gain visibility. Many people come up to us to tell us how fabulous we are. We collect their contact information, but often they call us first.

Another important part of our grassroots marketing is our Internet strategy. For example, moms usually find activities for their kids on the Internet via “mommy” blogs, events calendars, mom’s groups, etc. Part of our marketing is about finding those Internet-based sites and working with them to get the word out about Bach to Rock. It’s often free to list your product and service. We aren’t very oriented toward paid media ads, although we do a little bit of that. We’re more about finding the local influencers, all the blogs and Internet places, the right networks and organizations.

What are you hearing back from first franchisees about their locations? The first New York school beat our projections by 30% in their first year. Their school did in one year what our corporate school did in two years. They are now opening the second and third schools 12 months ahead of their original schedule.

What makes Bach to Rock a worthy brand? The No. 1 thing that sticks out for me is that Bach to Rock is a fun brand. It’s fun for everyone involved — owners, investors and consumers. Bach to Rock is vibrant and exciting. Most brands aren’t nearly as much fun! Bach to Rock is about music. It’s about kids. And it’s happy. There are probably other franchise brands that have a bit of what we offer. For example, Sylvan Learning Center literally has changed kids’ lives, but you are starting from a negative side of things because the kid is coming from a deficit. Bach to Rock is all about smiles — smiles for the kids, the teachers, the audiences — and all those bump up against the brand.

How is Bach to Rock changing the face of music education? Franchises often evolve by helping a sector of an industry become less fragmented. Music education is certainly fragmented. You have the lone wolf guitar teacher who comes to your home or the lady down the street who gives piano lessons. Sometimes lessons are offered at a local retail store where instruments are sold, but music lessons are often relegated to a back room. We are establishing a national brand in a fragmented industry and creating it for a broad-based marketplace.

We are more broad-based than School of Rock, where the students stop taking music lessons at 18 and only play rock music. Bach to Rock offers music in almost every genre for students 9 months to 99 years old. We’re about creating well-rounded musicians. Bach to Rock has a curriculum that teaches you how to read music and learn music theory. It’s not just about memorizing the easy version of one song. We are changing the fragmented music industry and creating a one-stop shop for music education.

Bach to Rock has substantial financial backing from Cambridge Information Group. What kind of advantage does it give the brand to have an investment firm like CIG behind you? I was so happy when I found out that CIG was backing Bach to Rock. Their investment provides an infrastructure that makes things easier and more scalable for us. We work with really smart people we would never have access to otherwise. We have access to CIG’s entire IT department. We have a CFO handling multiple organizations; we have access to a General Counsel and a top-notch HR department. We benefit from being around all this tremendous expertise and infrastructure. It makes so much of what we do easier and so much more professional.

Bach to Rock is a music education franchise that knows  learning music should be fun and that students learn best when they play music they enjoy. We are one of the nation’s fastest-growing private companies — named to “Inc.” magazine’s annual Inc. 500|5000 list for three consecutive years. To find out why, visit our research pages. If you would like to read a Bach to Rock franchise review, please visit our blog. To learn even more, fill out a form to download our free franchise report and someone will call you to start a conversation. We look forward to speaking with you!