We couldn’t be any more excited — or more proud — of Matt McAndrew’s ongoing success on NBC’s hit show The Voice. Though we can’t take credit for Matt’s talent and likability, we can take credit for having the good sense to hire him as a teacher at Bach to Rock.

Before Matt traveled to Los Angeles to participate in The Voice he was a sought-after teacher of guitar, voice and band at the Bach to Rock franchise school in Wayne, Pennsylvania. And Matt is an example of a typical Bach to Rock teacher, because identifying and hiring great teachers is a Bach to Rock specialty.

Music instructors at our schools defy the stereotype of a dry, overly structured instructor who starts a beginning student with out-of-date songs and repetitive, boring drills. We search — and find — teachers who, like Matt, are working professional musicians and who have a bit of “free spirit.” They are versatile, creative and able to switch genres and styles in a heartbeat to adapt to individual students’ needs.

The Bach to Rock fun factor 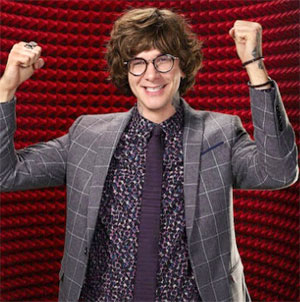 Matt McAndrew is one of the breakout stars on NBC’s popular singing competition show, The Voice. Matt is also an enthusiastic music teacher who has helped guide and inspire students at the Bach to Rock franchise school in Wayne, Pennsylvania.

In a recent interview with Nick Jaworski of the Leading Notes music education blog, Matt talked about two other important ingredients in his approach to music — his love of live performance and his belief that playing music should be fun. He also praised the Bach to Rock franchise for providing students with open-minded, creative teaching methods, which he says he didn’t have as a young child.

No wonder Matt was such a good fit with Bach to Rock! Our students begin playing live almost immediately. Bach to Rock bands and singing groups are out in the community performing at local schools, churches, festivals and neighborhood hot spots.

The foundation of our core philosophy at Bach to Rock is the belief that learning music should be fun, not an unbearable exercise.

Dave Leonard, owner of the Bach to Rock franchise in Wayne, says Matt’s talent and leadership are making a difference at the Philadelphia-area school.

“Since joining Bach to Rock in 2013, Matt has truly inspired a number of students to take their music to another level,” Dave says. “Matt also has developed a student band at Wayne Bach to Rock that is performing locally and learning the skills needed to be a real music team. We are excited to see where his talent will take him.”

Matt is also appreciative of Bach to Rock and has mentioned us several times on The Voice.

“I am excited and honored by the opportunity The Voice has given me to share the music I love with a bigger audience,” Matt says. “I’m thankful for the time I’ve spent at Bach to Rock with incredibly talented students, who inspired me day in and day out to turn my musical aspirations into a reality.”

The Bach to Rock franchise is one of the nation’s fastest-growing private companies — named to Inc. magazine’s annual Inc. 500|5000 list for three consecutive years. We have corporate-owned schools — two in Maryland and four in Virginia — the first of which opened in 2007. The first Bach to Rock franchised school opened in 2013, and there are now seven franchise schools in New York, Pennsylvania and California. Several more franchise schools are in the pipeline, and the company expects to triple in size by 2015.