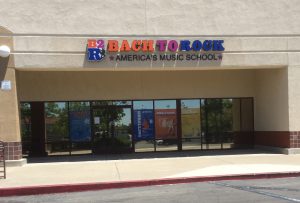 Bethesda, MD – (July 18, 2016):  Bach to Rock (B2R), America’s music school for students of all ages, announced today that its second California location is now open in Rocklin. To celebrate B2R’s grand opening, the school will host an open house on Saturday, July 30 from 11 a.m. – 2 p.m. at 2311 Sunset Boulevard, Rocklin, California, 95765. The community is invited to tour the school, enjoy a free music lesson, learn about individual lessons and group classes, try out free toddler “Mommy and Me” classes, enter into prize drawings and giveaways, check out the recording studio, meet the teachers, and more.

“I am confident that our newest Bach to Rock franchisees, Dr. and Mrs. Al Kahane and their son Robert, have the commitment and passion it takes to ensure their Rocklin school will thrive,” said Brian Gross, president of Bach to Rock.  “We are excited to bring Bach to Rock’s unique approach to music education to even more children in the Sacramento area through the addition of this second school. By allowing children to explore the kinds of music they love, and then play that music with other kids in a band and perform in a public space, the Kahanes will transform music education in the Rocklin area,” continued Gross.

Robert Kahane brings a unique perspective to the new business venture for his parents.  Robert is a musician and a member of a quartet with the owner of the Bach to Rock in Folsom, California. The couple couldn’t deny their son’s enthusiasm for the music program, nor the business success the Folsom location was experiencing.  “We are truly impressed with Bach to Rock’s innovative music education program. You can see how much students enjoy their customized lessons. We feel very confident in our decision to have our family join the Bach to Rock family,” said franchisee Dr. Kahane.

Bach to Rock Rocklin will offer a variety of programs for both students of all ages, including individual lessons, group classes such as Rock Band, early childhood programs for children as young as two years old, summer camps and birthday parties. Studies have shown that learning to play music in a group helps students learn teamwork, develop social skills and build self-esteem, among other benefits.  The school will also feature Bach to Rock’s new Touch Screen Tablet Technology, which allows teachers to customize lessons; gives parents the ability to view their children’s progress and homework; and provides administrators with the necessary tools to ensure students are receiving a well-balanced music education.

Bach to Rock is expanding at a robust and steady pace.  The franchise has repeatedly been named to Entrepreneur’s Franchise 500 and was listed in the Top Ten Trending Categories for 2016. Most recently, Bach to Rock won “Best of” Bethesda Magazine 2016 with first place in the Best Kids’ Art or Music Classes category as the readers’ pick. In 2014, Inc. Magazine named Bach to Rock one of the fastest-growing private companies in America for the third consecutive year.  Franchise Times has ranked it as one of the 500 Powerhouse Brands and on its Next 300 Franchise System list. In addition, Washington Family Magazine named Bach to Rock to its “Best Music Instruction” list and readers of Northern Virginia Magazine voted the company as “Best Piano Instruction.”  Bach to Rock also was named the number one company to watch by the Washington Business Journal.

Bach to Rock is currently seeking qualified candidates to open franchise locations in major metropolitan markets throughout the country. Bach to Rock is an opportunity for entrepreneurs to build a business that is dedicated to helping children and adults learn to play the music they love. While music experience or ability is not necessary, candidates should bring strong business acumen and the ability to build teams to ensure the school’s success.

To learn more about music school franchise ownership opportunities with Bach to Rock, as well as its veteran and franchise referral programs, contact Ralph Rillon, vice president of franchise development, at 1-855-227-7570 or franchise@bachtorock.com, or visit www.bachtorockfranchise.com.

For more information or to register for classes at B2R Rocklin:

Bach to Rock (B2R) is a music education school for students of all ages from early childhood through high school and beyond. B2R knows learning music should be fun and students learn best when they play music they enjoy. Weekly ensemble instruction and band formations lead to public concerts, Battle of the Bands and recording sessions in B2R’s professional recording studios. B2R builds technique, fosters teamwork and enhances self-esteem through private lessons, band instruction, and public performances. Bach to Rock opened its first corporate-owned location in 2007 in Bethesda, MD., and with the latest opening in Rocklin, has now grown to 15 with schools in California, Maryland, Massachusetts, New York, Pennsylvania, Virginia and Texas. Eight franchised schools are scheduled to open in Arizona, California, Connecticut, Georgia, New York, North Carolina, Texas and Virginia, with an additional 30 schools in development nationwide. Follow B2R on Facebook at www.facebook.com/BachtoRock and on Twitter at www.twitter.com/BachtoRock. For more information, visit www.bachtorock.com or call 1-877-227-8558.