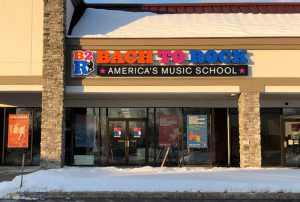 Community Invited to Open House on January 13, 2018
Bach to Rock (B2R), America’s music school for students of all ages, proudly announces it is opening a new location in Penfield, New York. The community is invited to the free grand opening festivities on Saturday, January 13, 2018 from 10 a.m. – 2 p.m. at 2160 Penfield Road, Penfield, New York, 14526.  Attendees are welcome to tour the school, enjoy a free music lesson, learn about individual lessons and group classes, try out free toddler “Mommy and Me” classes, enter prize drawings and giveaways, check out the recording studio, and meet the teachers.  This location marks Bach to Rock’s fourth school in New York- its first in upstate – and will be its 27th school in the country.

“Our new franchisees, Nick and Amy Valente, have been a perfect addition to the Bach to Rock family.  They are dedicated to ensuring their school becomes an integral part of the Penfield community and they are passionate about transforming music education,” said President of Bach to Rock, Brian Gross.  “Families in Penfield, Pittsford, Rochester and the surrounding communities will greatly benefit from Bach to Rock’s innovative approach to music instruction and especially how this dynamic couple will bring it to life,” Gross continued.  Bach to Rock was founded on the premise that learning how to play music should be fun. And it’s proven that students learn best when they play music they love.

The Valentes are a charismatic and energetic team whose collective experiences in business and education have prepared them well to become Bach to Rock franchisees. Nick has a Master’s degree in strategic management and worked as an executive for several multi-billion-dollar global organizations for more than two decades.  Additionally, he is an accomplished musician, songwriter, and recording artist in the band Halo. Amy holds a Master’s degree in business administration, and a Doctorate degree in education. She worked in executive management for over 20 years before embarking on a career change to teaching.  She is currently a business professor at Cayuga Community College in Auburn, New York.

The duo shares a love of music, both on stage and off.  Nick plays guitar, bass, keyboards, and sings and he also is a songwriter, engineer and producer.  Amy’s love of music was inspired by her mother’s talent playing the piano.

“Our dreams of having a business focused on music education and performance are coming true. We are confident that students of our Bach to Rock school will love exploring their musical potential and creativity here,” said the couple.  “We are eager to open our doors to start making music and help our students become musicians.”

Bach to Rock Penfield will offer a variety of programs for students of all ages including: individual lessons; group classes such as Rock Band; the Rock City program for preschoolers and toddlers; Kids-n-Keys for children in grades K-2 interested in piano; along with summer camps and birthday parties. Studies have shown that learning to play music in a group helps students learn teamwork, develop social skills and build self-esteem, among other benefits.  Recently, Bach to Rock introduced MyB2R, an online dashboard offering customers real-time access to student progress and more. MyB2R is the only digital service of its kind in the music school industry, and provides the ability to track student advancement, schedule lessons, obtain homework and stream over 400 pre-recorded songs to practice at home.