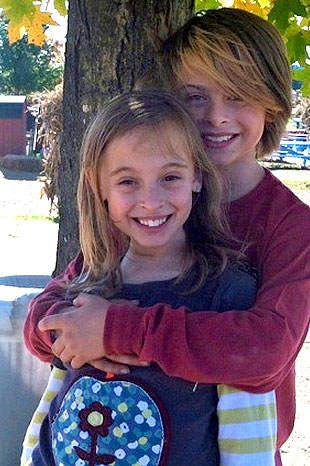 Nine-year-old twins Josie and Will Mansfield started classes at Bach to Rock when they were 3. Both are members of Bach to Rock bands that play regular public gigs.

Melinda Mansfield is a singer and music therapist. Yet, when she decided her own children — twins Josie and Will — needed exposure to music, she turned to the Bach to Rock franchise in South Riding, VA. and enrolled them in a Kids n Keys class. The twins at the time both had developmental challenges from a premature birth. Both are soaring now, and Melinda has become a passionate Bach to Rock fan and customer. Josie plays drums and sings, and Will is a guitarist in a rock band. Melinda couldn’t be prouder, and she says both children have come a long way in overcoming the obstacles caused by their premature births. In the following Bach to Rock franchise review Melissa talks about her family’s musical journey with Bach to Rock.

Tell us a little about your family and your background in music.

I’m a trained singer, and I have a masters degree in music therapy. I went to Mills College in Oakland, CA, where I studied with Dame Donna Peterson, a world-renown mezzo-soprano from the San Francisco Opera and Faith Winthrop, a San Francisco jazz singer and artist. I also sang in multiple a cappella groups at UC Berkeley and Mills College. After college, and a stint in Graz Austria for opera training, I decided to go into music therapy. I thought it would give me a more balanced life. Plus, I wanted to help others through music. Through music therapy, I was able to work with many different populations and bring music to many people — pediatric oncology, pediatric and adult hospice, adult, teenage and child psychiatric facilities, children with special needs including autism and CP and children and teenagers in an alternative educational setting.

I slowed down my life as a music professional when my husband and I moved from California to Virginia. I got pregnant with twins, and decided to stay at home because I wanted a more focused family life. The twins, Will and Josie, are now 9 years old. They were premature babies and had some sensory motor integration problems that required extra attention. I’m still heavily involved with music at my church, where I’m the music worship leader. I still do some solo work here and there and own a face-painting and body art business. 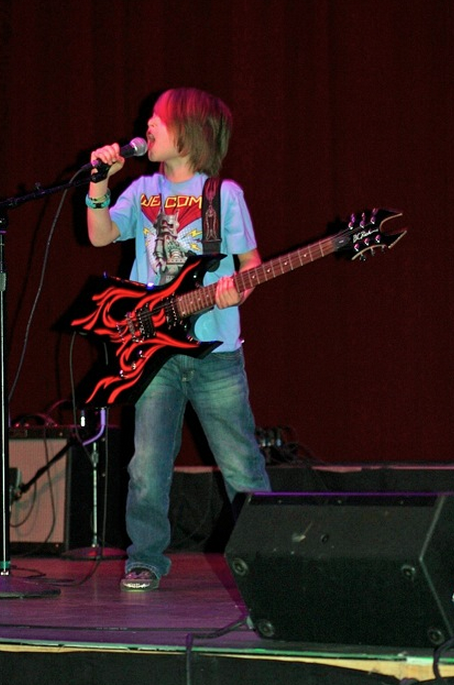 Will Mansfield’s band, Lego Jitsu, has been together for a year and has played at the Fillmore.

How did you end up finding out about the Bach to Rock franchise?

Bach to Rock had just opened up in our neighborhood. I passed by and actually went in and talked to the administrative person who was answering the phones. My family has now been with Bach to Rock for several years. We’ve had three teachers so far, which is awesome and a little unusual I think. My son Will is in a Beastie Boys-type band. My daughter Josie is in a girl band. Will plays electric guitar and sings, and Josie plays drums.

Will and Josie started when they were 3. We had them in Kindermusik, but it wasn’t very serious. We started with Bach to Rock because I thought it would be helpful for some of the sensory motor issues they faced connected with being premature. Josie really loved the drums, and they turned out to be a great avenue to help her with spatial awareness She had a problem with gross motor skills so, we set her up drumming with an actual drum kit, which was hilarious because she is an itty bitty teeny little girl. Josie has an amazing ear for rhythms now. It’s automatic; it’s a part of her. I think it also really helped her organize her brain.

Will started with drums, too. He wanted to move on to guitar but his hands weren’t big enough. He started acoustic guitar in first grade, and then we switched him to electric guitar. We didn’t know this at the time, but Will is dyslexic. He also had a problem with fine motor skills. Some people advised us to use Legos more with him, but we thought guitar would be better because it would require fingering coordination. He really caught on to guitar tablature, which is amazing to me. He has learned to read tablature as well as rhythms and chords, and he is continuing to learn them.

My kids have an amazing teacher — Sean Mason. He started teaching them when he was 18. He’s about 22 now, so he’s been with them for four or five years. I have worked with a lot of very fine musicians in the past, and Sean is really one of them. He is both a talented musician and is also good at translating that information to the kids.

What is it about him that really makes him stand out?

Sean is music. He plays the drums guitar and bass, composes and is knowledgeable about theory and music software. The kids love him and they trust him, so they take risks — and he gets them to be very creative. When I was taking classical music lessons, it was traditional to play the piano first. I didn’t even know about improvisation until college. Sean encourages the kids to come up with their own music, improvise and move on to song. The music pertains to who they are; it’s the music they love. They stay engaged and excited about the entire process. It is truly a fantastic thing to watch.

Why is music important to your family’s life?

Music is everything in our family. At holidays, what do we do? We get together and we play music. In order to relax, we put on music. To get energized, what do we do? We put on music. Music is a way to enhance spirituality at church. Music also helps my children feel comfortable on stage. It gives them an overall sense of confidence and self-esteem. When Will competed in his first Battle of the Bands last year, he was 8 years old. He was on an enormous stage flooded with lights. It’s so thrilling to see his growth from his beginning days at Bach to Rock to this last Battle of the Bands. The confidence he has now in himself is phenomenal.

Is there any correlation between how your kids are doing in school and their involvement in music?

I think there is. It helps focus their attention. It also helps them a lot with the way they present things in front of people. It also helps them be more creative. They are able to explore music and not be afraid. That creative process springs from music, and it just envelops the rest of their subjects.

What do you like so much about Bach to Rock, and why does it stand out so much for your family?

Music brings people together, period. Bach to Rock really focuses on that. They care about your kids. They always go above and beyond, and they are happy to do it. Bach to Rock is an important part of our family. We have started to become good friends with the parents of the other kids Bach to Rock bands. We go out to dinner together, and the kids have developed wonderful friendships and so have I. I have been there for so long now, I guess I’ve become one of the fixtures.

Bach to Rock is very family-focused. When my grandmother passed away, my mom wanted me to sing at her funeral, and I just couldn’t do it. So Bach to Rock recorded my voice and added a guitar part. We recorded a CD to play at the funeral. They also helped me record a song for my grandmother before she passed away, when she was in the hospital. I played it for her over the phone. You don’t get that kind of kindness and thoughtfulness from most businesses.

I also had a great birthday party at Bach to Rock. It was particularly hilarious because many of my friends are not very musically inclined. We put them all into bands and groups, and they had the best time. It’s been a year, and everyone still says that was the best party ever.

If you were going to recommend Bach to Rock to a friend, what would you tell them?

Many of my friends have taken their kids to Bach to Rock because they trust in my judgment. I tell them that they’ll have a great experience with the kids, families and teachers. Something they won’t get anywhere else. Bach to Rock was willing to take a risk with my kids. I have no trouble at all recommending them.

How are your kids doing now?

Fantastic! I am continually amazed at Josie’s drumming skills. She is tiny so she actually has to step up to play the bass drum, but she is on time and continuous. She looks natural on stage, and it is amazing to watch. At the last Battle of the Bands, we were sitting there watching the kids and talking about their growth — their assertiveness on stage, how excited they get about music and the togetherness they feel in being a part of a band. And the music is so cool, you can really record some of their music. It’s that good. Josie’s band is a lot younger and just getting started. Will’s band, Lego Jitsu has been together for about a year now. They performed at the Fillmore. They’ve played at schools for festivals, HOA events, pumpkin patches, Leesburg First Fridays and those types of events. One time they even played twice in one day and had to move from one site to another. We joke about them being “on tour.” Their music gets more and more mature.