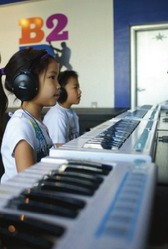 Included with the new stores coming to Bristow Commons on Devlin Road will be a Bach to Rock. Bach to Rock is a music school that subscribes to the philosophy that students learn best when they join together to play the music they most enjoy.

According to Bach to Rock President, Brian Gross, the Bristow location is just one of two new Bach to Rocks coming to the Northern Virginia area.

“Bach to Rock has been a part of the Washington, D.C. area since our first school opened in 2007, and we have been thrilled by the positive responses from parents and students to our variety of music programs,” said Gross. “There is a demand in the region for what Bach to Rock offers. With music and arts programs continuing to be cut due to diminishing school budgets, Bach to Rock helps meet the increased need for high-quality music education.”

Sameer Patel, owner of the Bristow franchise and investor in Bristow Commons, said he was motivated to buy the music franchise after seeing his young children interact in the program.

“Having my kids go through it, I’m really seeing that it works,” Patel said.

The Bach to Rock system starts children learning music much earlier than other music schools. They will work with babies through adults, using innovative techniques that are fun and challenging and allow students to play their favorite kinds of music. Their system also works differently than traditional music lessons because the Bach to Rock program is designed to be high interest, working with children on the level they can process, but which is also challenging to them.

“It is a much more natural precursor to music lessons than just jumping into piano lessons,” said Patel. “There is a much higher likelihood that the kids would stick with it.”

Bach to Rock starts with infants, introducing them to rhythm, motion and honing their fine motor skills in a way that seems like play. However, Patel’s children started with “Rock City” classes for 3 to 5-year-olds. He explained that at this age the B2R instructors teach them how to pick up instruments like guitars, drums and the piano and begin playing.

“There are some Suzuki elements, but also more traditional site reading,” Patel said.

And unlike most young-children programs, these children participate in group lessons, which can be more fun and less intimidating.

But Bach to Rock is not only for the very young. It continues when the students are teenagers and adults, allowing their students to play music they love, participate in jam sessions, and like sports, emphasizing teamwork.

Plus B2R creates an environment that students can relate to, because they are immersed in the experience of being a rock performer.

“We found that the Bach to Rock teachers have this edgy ability to relate to kids. They play in bands themselves,” Patel said.

Additionally, 7 to 18-year-old students are eligible to take private lesson to improve upon their skill. After 11-years-old, they can also play with a band.

“The teachers have specialties but also have ancillary experience,” basically the knowledge to advise students on becoming professional musicians, should they decide to follow that path.

The center will also include a recording studio available for rent and will encourage students to play concerts and battles of the band.

Patel thinks while teenagers will want to be involve in rock music, parents should see the value in starting their children early in music lessons.

“[I see music as] the intersection between math and art, because there’s a technical aspect to it, and then there’s an aesthetic to it. They have to hone both sides of their brains.”

He also encourages adults to come in for lessons and join a band as well.

He said at his children’s Bach to Rock school in Bethesda, Maryland, he sees many parents also taking music lessons. Parents bring their children and then realize that instead of sitting in the lobby, they can be taking lessons in an instrument they have always wanted to learn to play. Patel believes with the new music school in Bristow, rock resurgence will spread throughout the community, leading to the forming of new bands.

He also said that Bach to Rock is exactly the kind of vibrant, community-centered store he wants to bring into Bristow Commons, where he hopes people will be excited by the stores, restaurants and neighborhood conveniences that will enrich their community.

Regionally, Bach to Rock is also excited about the expansion into western Prince William County.

“We look forward to growing our presence in Northern Virginia and offering our fun, progressive curriculum to even more families in Bristow,” Gross said.

About Bach to Rock
Bach to Rock (B2R) is a music education school for students of all ages from early childhood through high school and beyond. B2R knows learning music should be fun and students learn best when they play music they enjoy. Weekly ensemble instruction and band formations lead to public concerts, Battle of the Bands and recording sessions in B2R’s professional recording studios. B2R builds technique, fosters teamwork and enhances self-esteem through private lessons, band instruction, and public performances. Bach to Rock opened its first corporate-owned location in 2007 in Bethesda, Md., and has since grown to six corporate schools — two in Maryland and four in Virginia. There are two franchise-owned schools in Port Washington, N.Y., and Wayne, Pa. Additional franchised schools are slated to open in Sacramento, Calif., Long Island, N.Y., Bristow, Va., and Fredericksburg, Va., in 2014. Follow B2R on Facebook at www.facebook.com/BachtoRock and on Twitter at www.twitter.com/B2RMusic. For more information, visit www.b2rmusic.com or call 1-877-B2R-8558.

Read the article on Bristow Beat.